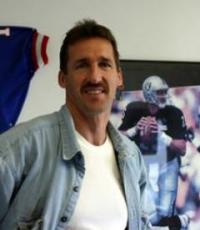 He was the starting quarterback for the New York Giants Super Bowl XXV Championship team
Fee Range: $5,000 - $10,000
Secure Jeff Hostetler
for Your Event

Jeff W. Hostetler, a.k.a. "Hoss" is a former NFL quarterback, who played for the New York Giants, Los Angeles/Oakland Raiders, and Washington Redskins.

Hostetler started his career at Penn State, where he started two games for the 1980 season. But Todd Blackledge beat him for the job, and Hostetler transferred to West Virginia. Hostetler sat out the 1981 season, due to NCAA transfer rules, while Mountaineers' famed quarterback Oliver Luck led the Mountaineers to an upset win against the University of Florida in the Peach Bowl.

Hostetler's first game as a Mountaineer was a shocking 41-27 win over the #9 Oklahoma Sooners, when he threw for four touchdowns and 321 yards. Another big win that '82 season was a week later against the University of Maryland Terrapins, who were led by Boomer Esiason. The Mountaineers won 19-18 against the Top 10 ranked Terps. The Terps lost the game on a 2-point conversion, while Hostetler threw for 285 yards and a touchdown. Hostetler led the Mountaineers to the 1982 Gator Bowl, where they lost to Florida State 31-12.

In 1983, Hostetler led the #7 Mountaineers over Big East rival Pitt after a 4th quarter run to beat the Panthers 24-21, the first victory over Pitt in seven years. In the 1983 Hall of Fame Bowl, Hostelter pulled out a come-from-behind 20-16 victory over the University of Kentucky, throwing two touchdowns. Hostetler ranks among single-season leaders at WVU in total offense, passing yards, pass completions, pass attempts, touchdown passes and passing efficiency. Hostetler finished his senior season in the 1984 Hula Bowl and in the Japan Bowl.

Hostetler was drafted by the Giants in the third round of the 1984 NFL draft, where he served as backup to Phil Simms. In his first five seasons, he played sparingly, rarely making an appearance.

However, on December 15, 1990, Simms broke his foot during a game against the Buffalo Bills. The following week, Hostetler, who had thrown only 109 passes in his career for the Giants, took over as the starting quarterback. The Giants won their final two regular seasons games and swept through the playoffs, defeating the Bills in Super Bowl XXV, 20-19. During the game, he completed 20 of 32 passes for 222 yards, with one touchdown and no interceptions.

During the summer of 1991, new Giants head coach Ray Handley allowed Hostetler to compete with Simms for the starting job, and amid much controversy Handley named Hostetler the starter for the season-opening Monday Night rematch with the 49ers. Hostetler's Giants won that game, but finished the season 8-8, and after a disappointing 6-10 season in 1992, he left the team via free agency to join the Oakland Raiders. During his four years as a Raider, Hostetler was voted to his only Pro Bowl, in 1994. He also led them to an impressive 42-24 playoff win over the Denver Broncos in the 1993 season, throwing for 294 yards and 3 touchdowns. He finished his career with two seasons with the Redskins (1997 and 1998); during his last season he spent much of his time on injured reserve and did not see any playing time.

Secure Jeff Hostetler for Your Event

Based on your interest in Jeff Hostetler as a speaker or for a personal appearance, Direct Sportslink has provided you additional links below for other sports talent with similar appearance fees, speaker topics, and categories that match Jeff Hostetler.