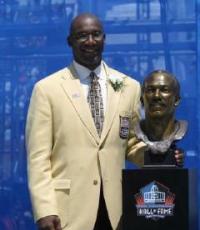 He is best remembered for his actions in the Super Bowl. In Super Bowl XIII, he caught a record-tying 75-yard touchdown pass from Terry Bradshaw that would later be a crucial touchdown in a 35-31 Steelers win over the Dallas Cowboys. Stallworth has held the Super Bowl records for career average per catch (24.4 yards) and single-game average, 40.33 yards in Super Bowl XIV. He had 12 touchdown receptions and a string of 17 straight games with a reception in post-season play. Stallworth also scored touchdowns in eight straight playoff games at one point (1978-1983), an NFL record.

Stallworth led the AFC with a career-high 1,395 yards gained on 80 receptions in 1984, when he was named the NFL Comeback Player of the Year. He helped the Steelers defeat eventual Super Bowl Champion San Francisco for their only loss of the season and led the Steelers in a surprising playoff run that featured an upset win over the Denver Broncos in the AFC Divisional Playoffs.

In 1986, he founded Madison Research Corporation. The company specialized in providing engineering and information technology services to government and commercial clients. Under Stallworth's leadership, MRC grew to more than 650 employees and $69.5 million in revenues.

Stallworth was inducted into the Pro Football Hall of Fame in August 2002.

Secure John Stallworth for Your Event

Based on your interest in John Stallworth as a speaker or for a personal appearance, Direct Sportslink has provided you additional links below for other sports talent with similar appearance fees, speaker topics, and categories that match John Stallworth.