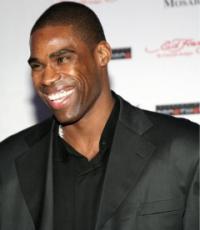 He was a fan favorite at the University of North Carolina and played many years in the NBA
Fee Range: $10,000 - $20,000
Secure Antawn Jamison
for Your Event

In his junior year at the University of North Carolina, Jamison was awarded both the Naismith and Wooden Awards as the most outstanding men's college basketball player for the 1997-98 season. On March 1, 2000 Jamison's #33 was retired at the Dean E. Smith Center. He became only the seventh North Carolina basketball player to have his number retired.

Jamison was selected by the Toronto Raptors with the fourth pick of the 1998 NBA Draft, who then dealt his rights to the Golden State Warriors in exchange for former North Carolina teammate and best friend Vince Carter.

In 2003, he was traded to the Dallas Mavericks, and experienced his first winning season in 2003-04 as the Mavericks finished 52-30 and made the playoffs, which marked the first time in his career that Jamison had experienced post-season play. Jamison was also named as the NBA's Sixth Man of the Year for his efforts.

During the 2007-08 season, Antawn was named to his second NBA Eastern All-Star team.

Jamison awarded his first Antawn C. Jamison Scholarship at his high school alma mater in 2003. Jamison has also launched a campaign which he calls "A Better Tomorrow" which he hopes to use to provide the underprivileged with a chance at a better future. He says of the project: "As a professional athlete, I have an obligation to help those less fortunate. I really enjoy being in a position to aid my community - both in the Bay Area and back home in Charlotte - and put a smile on somebody's face. That is what it is all about. I think it is especially important to give back during the holidays, when people tend to feel a little down if things are not going too well."

Secure Antawn Jamison for Your Event

Based on your interest in Antawn Jamison as a speaker or for a personal appearance, Direct Sportslink has provided you additional links below for other sports talent with similar appearance fees, speaker topics, and categories that match Antawn Jamison.