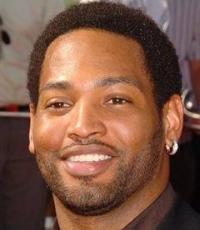 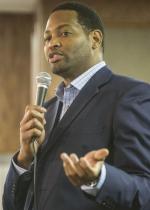 Robert Horry, known for his clutch basketball shots during his NBA career, delivered a great motivational speech to the Sweeny High School seniors emphasizing determination and small-town values reminding the students to "take their best shot" and never give up. “Apply yourself, even on those days when you’re reading a book and you start to feel sleepy, and motivate yourself to push,” Horry said. “If you’re going to be successful in life, it’s up to you.” After speaking Robert handed out student scholar awards - the students were thrilled to meet the seven time NBA Champion. Direct Sportslink works directly with Robert Horry as a Robert Horry Booking agent to secure him for any type of appearance.  To secure Robert for a speaking engagement, personal appearance, or endorsement please contact a Direct Sportslink booking agent.

Robert Horry was fantastic! Everyone loved him…he made the front page of our local newspaper! Thanks for all your help and suggesting him as the best speaker for our Student Scholar sponsored event!

As a senior at Andalusia High School, Horry won the Naismith Alabama High School Player of the Year award. He attended the University of Alabama on a basketball scholarship, where he selected to the All- Southeastern Conference, the SEC All-Defensive and the SEC All-Academic teams.

Horry was selected 11th overall in the 1992 NBA Draft by the Houston Rockets. He spent his first four seasons with the Rockets, helping them win the NBA Championship in 1994 and 1995. Horry set the individual NBA Finals record with seven steals in a game and five 3-pointers in a quarter.

Horry was traded to the Detroit Pistons in 1994. He went on to be a key member of the Rockets' title teams and began to lay the foundations for his "Big Shot Rob" reputation with a game-winning jumper in the final seconds of Game 1 of the Rockets 1995 Western Conference Finals series vs. the San Antonio Spurs and adding a crucial basket in a 106-103 win in the NBA Finals Game 3 against the Orlando Magic.

In 1996 Horry was traded to the Phoenix Suns, where he spent a season before another trade led him to the Los Angeles Lakers. Horry was a member of the Lakers when they won three consecutive NBA championships (2000, 2001, and 2002), and he added to his reputation for coming up with clutch playoff baskets when the Lakers needed them most.

Over the Lakers' three-year run, Horry made a game-clinching three-pointer in at least one game in four straight playoff series.

Following the 2002-03 season, Horry signed with the San Antonio Spurs, who, with his help, would would eventually win the 2005 and 2007 NBA Finals. After the 2007–08 season, Robert Horry became a free agent but went unsigned, marking his last pro season.

Secure Robert Horry for Your Event

Based on your interest in Robert Horry as a speaker or for a personal appearance, Direct Sportslink has provided you additional links below for other sports talent with similar appearance fees, speaker topics, and categories that match Robert Horry.