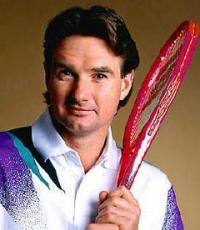 He is a former World No. 1 tennis player; He is inducted into the International Tennis Hall of Fame; He won eight Grand Slam singles titles and two Grand Slam doubles titles
Fee Range: $30,000 - $40,000
Secure Jimmy Connors
for Your Event

Connors went to college for a year at UCLA, where he won the NCAA singles title in 1971. He turned professional in 1972, and won his first professional title later that year at Jacksonville, Florida.

Connors' extreme competitiveness on court quickly made him stand out. He simply refused to ever accept that he was beaten and gave absolutely everything on every point of every game, no matter how apparently hopeless the cause. He was also not averse to playing to the crowd or abusing his opponent or the umpire?anything he could think of to give himself an edge. His brash behaviour both on and off court came to earn him a reputation as the brat of the tennis world. He acquired the nickname of the "Brash Basher of Belleville" (after the St Louis suburb where he grew up). His high-profile romance with fellow teen tennis prodigy Chris Evert in the early years of his career also helped to keep him in the headlines.

The defining moment of Connors' later career came in 1991. His career had seemed to be at an end in 1990, when he played only three tournament matches (and lost all three), dropping to No. 936 in the world rankings. But after surgery on his deteriorating left wrist, he came back to play 14 tournaments in 1991, climaxing with a phenomenal run at the US Open. While celebrating his 39th birthday during the championships, Connors powered his way all the way through to the semi-final before finally being beaten by the reigning French Open champion Jim Courier.

During his career, Connors won a record 105 men's singles titles. He also won 15 doubles titles (including the men's doubles titles at Wimbledon in 1973 and the US Open in 1975).

Secure Jimmy Connors for Your Event

Based on your interest in Jimmy Connors as a speaker or for a personal appearance, Direct Sportslink has provided you additional links below for other sports talent with similar appearance fees, speaker topics, and categories that match Jimmy Connors.