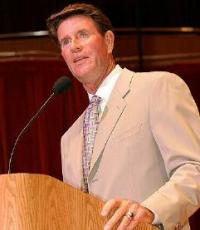 He was elected to the Baseball Hall of Fame in 1990; He is the only pitcher to win a World Series game in three different decades
Fee Range: $10,000 - $20,000
Secure Jim Palmer
for Your Event

Jim Palmer, was a right-handed starting pitcher who played his entire career for the Baltimore Orioles (1965-1984). He is considered one of the best pitchers in Orioles history. He was a mainstay in the rotation during Baltimore's six pennant winning teams between the 1960s and 1980s.

In 1966 Palmer joined the starting rotation. Baltimore rolled to the pennant, behind Frank Robinson's MVP season. Palmer won his final game against the Oakland Athletics to clinch the American League pennant. That October 6, he became the youngest pitcher (20 years, 11 months) to win a complete-game, World Series shutout, defeating Sandy Koufax and the Dodgers in Game 2, and the Orioles went on to sweep the series.

Palmer has spent much of his post playing career broadcasting Orioles games.

Secure Jim Palmer for Your Event

Based on your interest in Jim Palmer as a speaker or for a personal appearance, Direct Sportslink has provided you additional links below for other sports talent with similar appearance fees, speaker topics, and categories that match Jim Palmer.