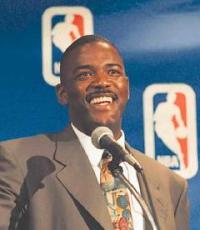 Joe Dumars Speaking with the Moderator

Macomb Community College was looking to secure a noteworthy celebrity to help raie money for their Cultural Center Endowment Fund. Joe, a NBA Champion both as a player and General Manager, was a great selection. His message about teamwork, leadership and building a winning team resonated well with the audience.

Joe Dumars was drafted in the first round, out of McNeese State University, he played guard for the Detroit Pistons for his entire career, from 1985 to 1999. He won two championships as a player in 1989 and 1990. He was the 1989 Finals MVP, averaging 27.3 points per game as the Pistons swept the Los Angeles Lakers in four games.

During his regular season career, he was selected to the All-Star team six times, and to the All-Defensive first team four times. In 14 seasons - all with the Pistons - Dumars scored 16,401 points, handed out 4,612 assists, grabbed 2,203 rebounds and recorded 902 steals.

Although he was a member of the famed "Bad Boys" teams, known for their aggressive play and demeanor, he became personally known for his upstanding behavior. The NBA has named its Sportsmanship Award after him. His #4 jersey was retired by the Pistons in 2000.

Dumars became the Pistons' President of Basketball Operations prior to 2000-01 NBA season. He was voted the league's Executive of the Year for the 2002-03 season and quietly went on to build the team that would win the 2004 NBA Championship and the 2005 NBA Eastern Conference Championship - doing so largely with players who had been discarded by other franchises.

Dumars was inducted into the Basketball Hall of Fame in 2006.

Secure Joe Dumars for Your Event

Based on your interest in Joe Dumars as a speaker or for a personal appearance, Direct Sportslink has provided you additional links below for other sports talent with similar appearance fees, speaker topics, and categories that match Joe Dumars.