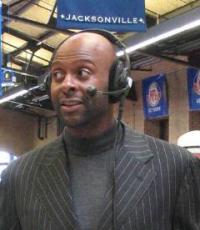 He is one of the best wide receivers to ever play in the NFL
Fee Range: Contact Us
Secure Jerry Rice
for Your Event

Direct Sportslink secured Jerry Rice for Continued Flight's motivational seminar titled "Intentional Greatness Legacy" in Las Vegas. By the event title you now know why Jerry, one of the greatest receivers to ever play football, was the keynote speaker. Jerry's appearance was a huge success as he shared stories about his career, habits, practices to be intentionally great, what his legacy meant to him and many motivating stories from his days playing in the NFL. To secure Jerry Rice for your motivational speaking engagement or any appearance contact a Direct Sportslink booking agent for his fee and availability.

Rice captured three Super Bowl rings as a wideout for the San Francisco 49ers, and also played briefly for the Oakland Raiders and Seattle Seahawks.

At the time of his retirement, he was the holder of 38 NFL records, a record in itself. Rice retired having scored the most touchdowns in NFL history (207), and holding virtually every significant career record for receivers, including receptions (1,549), yards receiving (22,895), all-purpose yards (23,540), touchdown receptions (197) and consecutive games with at least one catch (274).

Rice attended Mississippi Valley State University, becoming a standout on the football team. He acquired the nickname World, because there wasn't a ball in the world he couldn't catch. In college, he was named an AP All-American. The school later named its football stadium Rice-Totten Stadium in honor of Rice and quarterback Willie Totten who threw Rice his many touchdown passes at Mississippi Valley State.

Rice won the NFL Most Valuable Player Award in 1987 by Pro Football Writers of America and was Super Bowl MVP in Super Bowl XXIII.  He was also selected for the Pro Bowl 13 times. Since retiring from football, Rice has won Dancing With the Stars and worked as a NFL analyst for ESPN.

Secure Jerry Rice for Your Event

Based on your interest in Jerry Rice as a speaker or for a personal appearance, Direct Sportslink has provided you additional links below for other sports talent with similar appearance fees, speaker topics, and categories that match Jerry Rice.