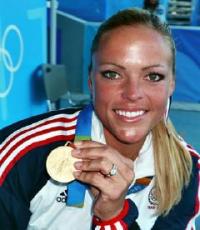 Jennie started playing softball at five years old. At La Mirada High School, Finch lettered four times in softball, and twice each in both, basketball and volleyball (As a senior,she was the captain of all three sports.)

Jennie Finch then played softball for The University of Arizona. She was a three-time All-American p/1b and Honda Award winner for the Player of the Year as a member of the Wildcat softball team.

Jennie came to prominence when she defeated Anna Kournikova in an ESPN online poll as the most attractive female athlete. She has appeared on various talk shows promoting softball and the U.S. Olympic Team.

Finch was offered a lucrative contract to appear naked for men's magazine Playboy, but commented to the press on August 14, 2004 that such an offer wasn't going to tempt her. She commented that she'd "rather be a role model for young girls." She said that muscles on women are beautiful.

Finch wore the number "27" in honor of her parents, who had their first date on the 27th.

In 2006, Finch appeared in Season One of Pros vs. Joes, a show in which sports stars compete with ordinary people. She was the first woman to appear on the show.

In 2008, Finch was featured as a contestant on the Celebrity Apprentice.

In 2011, Finch co-authored Throw Like a Girl: How to Dream Big and Believe in Yourself, with Ann Killion. The book is a collection of life lessons Jennie learned growing up playing sports. On November 6, 2011, just four and a half months after giving birth to son Diesel, Finch finished the New York Marathon with a time of 4:05:26, raising $30,000 for the New York Road Runners Youth Program.

In August 2011 she started work as a color analyst for ESPN softball coverage.

Secure Jennie Finch for Your Event

Based on your interest in Jennie Finch as a speaker or for a personal appearance, Direct Sportslink has provided you additional links below for other sports talent with similar appearance fees, speaker topics, and categories that match Jennie Finch.