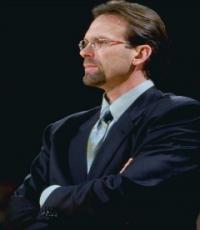 He was a fan favorite of Los Angeles due to his hustle, intensity, and relentlessness on the court
Fee Range: $5,000 - $10,000
Secure Kurt Rambis
for Your Event

During his playing days, Rambis was a favorite among the Lakers fans because of his status as an over-achieving underdog and ultimate team-player. Known for his defensive skills, Rambis also was an efficient clean-up man on offense with his field goal percentage reaching 59.5% at the peak of his career. Rambis usually wore a thick moustache and thick-rimmed black glasses, prompting Lakers announcer Chick Hearn to nickname him "Superman."

Rambis spent most of his 14 seasons in the NBA with the Lakers, winning championships in 1982, 1985, 1987, and 1988. Rambis also played for the Charlotte Hornets, Phoenix Suns and Sacramento Kings. Rambis is remembered in both Santa Clara (where he went to high school) and Los Angeles for his all out effort and willingness to do the "dirty work" that many players do not embrace. He was the first Greek player who ever played in NBA.

After retiring from his playing career, he briefly coached the Lakers franchise during the 1999 "lockout season" following Del Harris. He stayed on as an assistant coach when Phil Jackson took over in 2000. Rambis also had a recurring role as Coach Cleary in the family drama 7th Heaven.

Secure Kurt Rambis for Your Event

Based on your interest in Kurt Rambis as a speaker or for a personal appearance, Direct Sportslink has provided you additional links below for other sports talent with similar appearance fees, speaker topics, and categories that match Kurt Rambis.