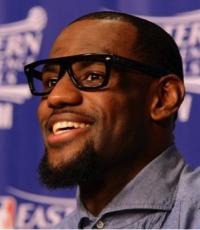 He is one of the greatest basketball players ever
Fee Range: Contact Us
Secure LeBron James
for Your Event

Nicknamed "King James", LeBron has been a two-time NBA champion, a four-time NBA Most Valuable Player, a two-time NBA Finals MVP, a two-time Olympic gold medalist, an NBA scoring champion, and the NBA Rookie of the Year. He has also been selected to numerous NBA All-Star teams, All-NBA teams, and All-Defensive teams.

James played high school basketball at St. Vincent–St. Mary High School in his hometown of Akron, Ohio. After graduating, he was selected with the first overall pick in the 2003 NBA Draft by the Cavaliers. James led Cleveland to the franchise's first NBA Finals appearance in 2007, losing to the Spurs in a sweep. In 2010, LeBron signed with the Heat. In his first season in Miami, the Heat reached the Finals, but lost to the Dallas Mavericks. James won his first championship in 2012 when Miami defeated the Oklahoma City Thunder, earning the NBA Finals MVP Award for his play. In 2013, the Heat won their second consecutive title and he repeated as Finals MVP.

He has also been featured in books, documentaries, and television commercials, and has hosted the ESPY Awards and Saturday Night Live.

Secure LeBron James for Your Event

Based on your interest in LeBron James as a speaker or for a personal appearance, Direct Sportslink has provided you additional links below for other sports talent with similar appearance fees, speaker topics, and categories that match LeBron James.