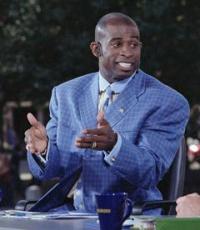 He is considered one of the most versatile athletes in all of sports history; He is the only player to ever play in a Super Bowl and a World Series in the same season
Fee Range: $40,000 - $50,000
Secure Deion Sanders
for Your Event

Sanders won the Jim Thorpe Award in 1988 while at Florida State University and is one of the best cornerback to ever play college football. His jersey at Florida State, #2, was retired in 1995.

In his nine-year, part-time pro baseball career, Sanders played 641 games with 4 teams. During his most productive year, 1992, he hit .304 for the Atlanta Braves, and stole 26 bases in 97 games. During the 1989 season, he hit a home run and scored a touchdown in the NFL in the same week, the first player to do so. Sanders is the only man to have played in a MLB and NFL game during the same day, and is also the only player to play in both a Super Bowl and World Series.

He played briefly with the San Francisco 49ers, where he won a Super Bowl, and went on to win another with the Dallas Cowboys, where he played for several years. He is the only player to catch a pass and make an interception in the Super Bowl. He later was acquired by the Washington Redskins, and retired in 2001, though he would later come back to play in the NFL in 2004.

During his 12-year career, Sanders was one of the most versatile weapons in the game. He intercepted 48 passes for over 1000 yards, and scored 22 touchdowns: eight interceptions, six punt returns, three catches, three kickoff returns, one rushing, and one fumble recovery.

Secure Deion Sanders for Your Event

Based on your interest in Deion Sanders as a speaker or for a personal appearance, Direct Sportslink has provided you additional links below for other sports talent with similar appearance fees, speaker topics, and categories that match Deion Sanders.