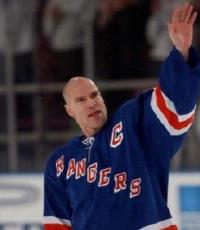 He retired as the only man to captain two different teams to the Stanley Cup Championship; He won six Stanley Cups over his career
Fee Range: $40,000 - $50,000
Secure Mark Messier
for Your Event

Mark Messier spent over a quarter of a century (including the lock out '04-05 season) in the NHL (1979-2005) with the Edmonton Oilers, New York Rangers, and Vancouver Canucks, and also played professionally with the World Hockey Association's Indianapolis Racers and Cincinnati Stingers.

Nicknamed "Moose", "The Captain", and "The Messiah", Messier was renowned as a fierce, tough competitor whose intense leadership in the locker room was as important as the goals he scored on the ice; many consider him to have been the greatest captain in hockey history. He holds the distinction of being the only man ever to captain two different franchises to Stanley Cup championships, winning six championships in total.

Though Messier ranked 2nd in all-time scoring at the time of his retirement with 1,887 points (694 goals and 1,193 assists) in the regular season, his greatness will always be measured in terms of playoff achievements. In Game 3 of the 1984 Finals, for example, with his Edmonton Oilers trailing the four-time champion New York Islanders by a goal, it was Messier's goal that began a comeback by Oilers. By series' end, it was he and not Wayne Gretzky who won Conn Smythe Trophy honors.

Messier retired eleven games back of Gordie Howe's NHL record 1,767 regular season games played, a record many consider unbreakable. Messier holds the record for most NHL regular season and playoff season games played at 1,992; Gordie Howe played in 1,924 including the WHA. Messier is one of a handful of players to have played 25 NHL seasons, doing so over four decades.

On January 12, 2006 during a very emotional ceremony that featured most of the 1994 Stanley Cup team, the New York Rangers retired his number (11) in a game against the Edmonton Oilers. He was inducted into the Hockey Hall of Fame (2007) in his first year of eligibility.

Secure Mark Messier for Your Event

Based on your interest in Mark Messier as a speaker or for a personal appearance, Direct Sportslink has provided you additional links below for other sports talent with similar appearance fees, speaker topics, and categories that match Mark Messier.