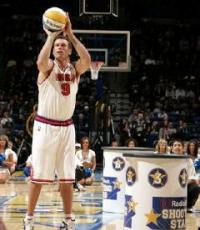 Known as Thunder Dan, he is one of the most popular Phoenix Suns players ever
Fee Range: $5,000 - $10,000
Secure Dan Majerle
for Your Event

Dan Majerle starred for Traverse City High School (now Traverse City Central) and nearby Central Michigan University, where the Suns selected him with the 14th pick of the 1988 NBA Draft, which the Phoenix Suns acquired in the Larry Nance trade along with Kevin Johnson.

Known by his fans as "Thunder Dan" he played 14 years in the NBA, primarily with the Phoenix Suns, although he also played with the Miami Heat and, briefly, the Cleveland Cavaliers. During his career, he was named to the All-Star team four times, and has the interesting distinction of having once been named an All-Star starter in a year in which he did not even start for his own team.

His nickname originated from his "thunderous" dunks in his early career, but as he grew older his style of play transitioned to that of a perimeter shooter and defensive specialist. He was the Suns greatest 3-point threat during their 90s playoff runs and a teammate of Charles Barkley. Whenever he scored on a three-point shot in a home game, a deafening clap of thunder was played over the arena's sound system.

Majerle was inducted into the Suns "Ring of Honor" on March 9, 2003. He has spent much of his post playing career as a coach in the NBA.

Secure Dan Majerle for Your Event

Based on your interest in Dan Majerle as a speaker or for a personal appearance, Direct Sportslink has provided you additional links below for other sports talent with similar appearance fees, speaker topics, and categories that match Dan Majerle.