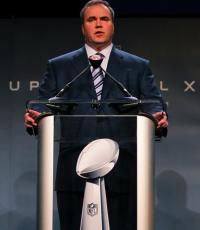 He was the head coach of the Super Bowl XLV winning Green Bay Packers
Fee Range: $20,000 - $30,000
Secure Mike McCarthy
for Your Event

In 1993, McCarthy began a stint with the NFL's Kansas City Chiefs; after working two years as an offensive quality control assistant, McCarthy became quarterbacks coach. McCarthy spent the 1999 season in the same position with the Green Bay Packers, coaching Brett Favre. After the 1999 season, McCarthy became the offensive coordinator of the New Orleans Saints. He would remain in that position for five seasons and was selected as NFC Assistant Coach of the Year by USA Today in 2000.

In 2005, McCarthy served as offensive coordinator for the San Francisco 49ers. On January 8, 2006, McCarthy was offered the head coaching postition of the Green Bay Packers.

In 2007, McCarthy led the Packers to a 13-3 record and made it to the NFC Championship game, where they lost to the eventual Super Bowl-winning New York Giants in overtime. That year, he finished second in voting for The Associated Press Coach of the Year award.

In 2010 McCarthy led the Packers to a 10-6 finish. This record was good for 2nd in the NFC North, behind the arch-rival Chicago Bears, with whom they split victories in the regular season. The Packers went on to defeat the number three seeded Philadelphia Eagles, the number one seeded Atlanta Falcons and the Chicago Bears in the NFC Championship game to advance to the Super Bowl to face the Pittsburgh Steelers. Super Bowl XLV was the first time these two storied franchises played each other in the postseason. The Green Bay Packers defeated the Pittsburgh Steelers 31-25 to win their fourth Super Bowl and 13th NFL title overall.

Based on your Mike McCarthy speaker fee search and appeareance booking interest we have provided you other popular Green Bay Packers for speaking engagements: Desmond Howard, Antonio Freeman, LeRoy Butler, and Brett Favre.

Secure Mike McCarthy for Your Event

Based on your interest in Mike McCarthy as a speaker or for a personal appearance, Direct Sportslink has provided you additional links below for other sports talent with similar appearance fees, speaker topics, and categories that match Mike McCarthy.