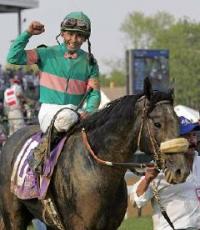 Smith has been one of the leading riders in U.S. thoroughbred racing since the early 1990s. The son of a jockey, Smith began riding races in his native New Mexico at age 11, and took out a jockey's license at age 16 in 1982. He left New Mexico the following year, riding mostly in the Midwest until moving to New York in 1989.

In 1991, he became one of the few American jockeys to win a European classic by claiming victory in the Irish One Thousand Guineas aboard Fourstars Allstar. The following year, he rode his first Breeders' Cup winner, Lure, in the Breeders' Cup Mile.

The year after that, 1993, he truly arrived as a top jockey, setting a North American record for stakes wins in a year with 62. Among his highlights were a win in the Preakness aboard Prairie Bayou and a successful defense of the Breeders' Cup Mile aboard Lure. That year, he won his first Eclipse Award as the nation's leading jockey, and also won an ESPY Award as top jockey. In 1994, he broke his own record for stakes wins with 68, 20 of them Grade I races. Several of those wins came while riding that year's Horse of the Year, Holy Bull. He also rode two winners in that year's Breeders' Cup, and again won the Eclipse Award as leading jockey. Smith went on to ride two Breeders' Cup winners in both 1995 and 1997.

In 2005, he rode 50-1 longshot Giacomo to victory in the Kentucky Derby. The win was Smith's first in the Derby.

Secure Mike Smith for Your Event

Based on your interest in Mike Smith as a speaker or for a personal appearance, Direct Sportslink has provided you additional links below for other sports talent with similar appearance fees, speaker topics, and categories that match Mike Smith.