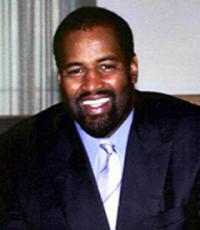 Richard Dent was the ideal local Chicago sports celebrity for a Chicago based company hosting a hospitality meet and greet at Soldier Field, the home of the Chicago Bears. All the guests were able to take a photo with him and hear great stories about the 1985 Super Bowl Champion team. To hire Richard Dent for an appearance or motivational speaking engagement please contact a Direct Sportslink celebrity booking agent.

Chosen by the Chicago Bears out of Tennessee State in the eighth round of the 1983 NFL draft, Dent became one of the anchors of the Chicago defense that helped take the team to two NFC championship games and a Super Bowl victory.

The 6-foot-5, 265-pound Dent was an outstanding pass rusher from his defensive end position because of his quickness and speed. He led the NFL with 17 quarterback sacks in 1985, when the Bears won the NFC championship and beat the New England Patriots 46-10 in Super Bowl XX. He was Super Bowl XX MVP.

Dent joined the San Francisco 49ers as a free agent in 1994 but missed most of the season with an injury. He returned to the Bears for one season and in 1996 he became a backup with the Indianapolis Colts, used primarily in passing situations. He retired after spending the 1997 season with the Philadelphia Eagles.

In his NFL career, Dent had 141 quarterback sacks in 203 games, including 151 starts. He also intercepted 8 passes, returning them for 89 yards and 1 touchdown, and he recovered 13 fumbles. In 1990, he returned a fumble for 45 yards and a touchdown.

He was inducted into the Pro Football Hall of Fame in 2011.

Secure Richard Dent for Your Event

Based on your interest in Richard Dent as a speaker or for a personal appearance, Direct Sportslink has provided you additional links below for other sports talent with similar appearance fees, speaker topics, and categories that match Richard Dent.