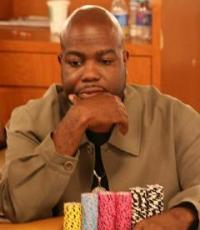 Darden's upbringing exposed him to poker early on. As he says: "My father had a little poker club in New Haven when I was a little kid. So I've been around that all my life, and my dad taught me to play." In those years, Paul was most often playing Five-and Seven-Card Stud.

Before becoming a professional poker player, Paul was a partner in a nightclub in New Haven and promoted rap shows, hip-hop, R&B and some jazz. As a tournament player, apart from his great game he is known for wearing stylish hip-hop clothing and jewelry, which have helped make him tremendously popular amongst younger poker enthusiasts.

Paul started his more serious poker playing as an adult at Foxwoods, in Connecticut. He later went to Atlantic City where he had a significant and divining encounter with Phil Ivey. Phil saw Paul's natural talent and took it upon himself to mentor him. Up until that point, Paul had mainly been playing Seven-Card Stud; Phil tried to steer him in the direction of No-Limit Hold'em.

Paul's success in televised tournaments has made him a celebrity, particularly among those of the younger generation. He says: "Young college guys always recognize me, and always ask questions. I've always been a people person, so you know I'm always like 'What's up?'

Paul's approach to poker is certainly working very well for him: "My strength is to try to play my opponent's hand, not mine, because I have my cards; my cards are easy to play. I try to put myself in their hand and play at me."

Secure Paul Darden for Your Event

Based on your interest in Paul Darden as a speaker or for a personal appearance, Direct Sportslink has provided you additional links below for other sports talent with similar appearance fees, speaker topics, and categories that match Paul Darden.