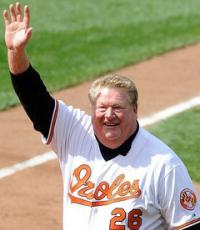 Powell joined the Orioles after leading the International League in home runs at Rochester in 1961. Hitting 25 home runs in 1963, then leading the American League in slugging percentage (.606) in 1964 with an explosive career-high 39 home runs despite missing several weeks because of a broken wrist. He dropped to .248 with 17 home runs in 1965, then won the American League Comeback player of the Year honors in 1966 (.287, 34 home runs, 109 runs batted in) while hindered by a broken finger.

In 1966, Powell, along with Frank Robinson and Brooks Robinson, led the Orioles to the 1966 World Series, and there they surprised the baseball world by sweeping the mighty Los Angeles Dodgers in four games to become baseball's world champions.

In 1970 he was the American League Most Valuable Player, just missing a .300 average on the last day of the season and hitting 35 home runs with 114 runs batted in. In the 1970 World Series, Powell homered in the first two games as the Orioles defeated the Cincinnati Reds in 5 games. Prior to the 1971 season, Powell appeared on the cover of Sports Illustrated for the 1971 baseball preview issue. Powell helped Baltimore to a third straight World Series that year, blasting a pair of home runs in game two of the American League Championship Series against the up-and-coming Oakland Athletics.

In a 17-season career, Powell posted a .266 batting average with 339 home runs  and 1187 RBI in 2042 games. At the time of his retirement, Powell was second only to Eddie Murray on the Orioles' all-time home run list.

Secure Boog Powell for Your Event

Based on your interest in Boog Powell as a speaker or for a personal appearance, Direct Sportslink has provided you additional links below for other sports talent with similar appearance fees, speaker topics, and categories that match Boog Powell.