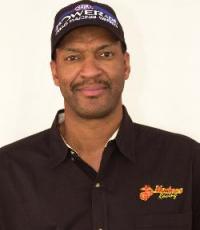 He was a three time All Star; His number 22 jersey was retired by the Cleveland Cavaliers
Fee Range: $2,000 - $5,000
Secure Larry Nance
for Your Event

Nance scored 15,687 career points and grabbed 7,352 career rebounds in thirteen seasons as a member of the Phoenix Suns and Cleveland Cavaliers, but he is perhaps best known as the first winner of the NBA Slam Dunk Contest in 1984, earning him the nickname "The High-Ayatolla of Slamola". Nance was a model of consistency throughout his NBA career. He averaged over 16 points and 8 rebounds per game for all eleven seasons as a starter. His best scoring average year was in the 1986–1987 NBA season, where he averaged 22.5 points per game. Always among the highest in field goal percentage, Nance was an excellent mid-range shooter as well as a talented inside player.

Nance's stint in Phoenix came to an end on Feb. 25, 1988, when he was traded to Cleveland. The trade worked out for both teams, as Nance proved to be the missing piece the Cavs needed to contend for a title in the East, while at the same time playing the role of frontcourt post partner to Cav center Brad Daugherty.

Larry Nance was a 3-time NBA All-Star 1985, 1989, and 1993, and an NBA All-Defensive Team First Team member in 1989, and a Second Team Member in 1992 and 1993. He was also consistently one of the league's better shot blockers, averaging 2.2 blocks per game during his career. Upon his retirement, he held the league record for most blocked shots by any player other than a center. In 1995, his number 22 jersey was retired by the Cavs.

Secure Larry Nance for Your Event

Based on your interest in Larry Nance as a speaker or for a personal appearance, Direct Sportslink has provided you additional links below for other sports talent with similar appearance fees, speaker topics, and categories that match Larry Nance.