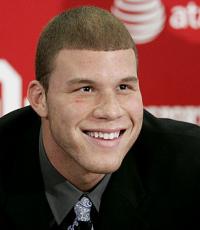 Griffin had a renowned high school career at Oklahoma Christian School, winning state titles each of his four years under his father, Tommy Griffin, who was the head coach. He played college basketball for the University of Oklahoma Sooners and was awarded numerous accolades in his second year including the Naismith College Player of the Year, Oscar Robertson Trophy and the John Wooden Award.

Griffin left college after two seasons to enter the 2009 NBA Draft where he was selected first overall by the Clippers. In his first season, he broke his left kneecap, which he injured during the final pre-season game, and underwent surgery missing the entire 2009–10 season. He made his NBA debut as a rookie the following season and was selected as an All-Star, won the 2011 NBA Slam Dunk Contest and was named the NBA Rookie of the Year. In 2011, Sports Illustrated ranked him as one of the NBA's 15 Greatest Rookies of All Time.

On July 10, 2012, Griffin signed a five year extension with the Clippers.

Secure Blake Griffin for Your Event

Based on your interest in Blake Griffin as a speaker or for a personal appearance, Direct Sportslink has provided you additional links below for other sports talent with similar appearance fees, speaker topics, and categories that match Blake Griffin.