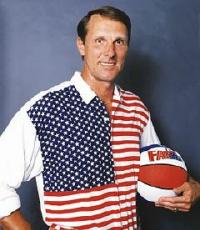 He is a member of the Basketball Hall of Fame; The Barry's are a legendary basketball family
Fee Range: $5,000 - $10,000
Secure Rick Barry
for Your Event

The 6-foot-7, 215-pound Barry joined the NBA's San Francisco Warriors and was named 1966 rookie of the year after averaging 25.7 points per game. The following season, he led the league in scoring with 35.6 points per game.

Barry joined Oakland in 1968, but a knee injury limited him to only 35 games. However, he averaged 34.0 points to lead the league. When the Oaks became the Washington Capitals for the 1968/69 season, Barry signed once more with the San Francisco Warriors. Another lawsuit forced him to remain with Washington.

He led the Capitals into the ABA playoffs by averaging 27.7 points a game, leading the league with an .864 free throw percentage. When the team moved to Virginia in 1970, Barry refused to go and was sent to the New York Nets for $200,000 and a first-round draft choice.

Barry signed as a free agent with the NBA's Houston Rockets in 1978 and finished his career there in 1979/80. Although best known for his shooting ability, he was also an outstanding passer and a fine defender who led the NBA in steals with 228 in 1974/75. The last player to shoot free throws underhand, he led the ABA in free throw percentage three times and was the best in the NBA four times.

Rick Barry's appearance fee is very reasonable based on his credentials. He was named one of the 50 greatest players in the history of the NBA, and he is the only guy to ever lead the NCAA, NBA and

in scoring?now that is impressive. It's not often you can find this type of legend in his appearance fee range.

Rick Barry's endorsement in the game of basketball comes with the highest respect. He has not only played and broadcasted the game but he has several kids who have played in the NBA for many years.

Secure Rick Barry for Your Event

Based on your interest in Rick Barry as a speaker or for a personal appearance, Direct Sportslink has provided you additional links below for other sports talent with similar appearance fees, speaker topics, and categories that match Rick Barry.