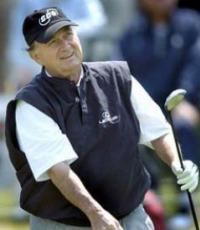 He is a member of the World Golf Hall of Fame; He won four major championships (U.S. Open, Masters, and PGA Championship twice)
Fee Range: $50,000 - $75,000
Secure Raymond Floyd
for Your Event

Floyd attended the University of North Carolina. He turned professional in 1961, and quickly established himself on the PGA Tour, with his first victory coming at the St. Petersburg Open Invitational in 1963. He went on to win 22 times on tour, with his final win coming in 1992 at the age of 49, making him one of the oldest players to win a PGA Tour event.

Floyd's wins included four major championships: the 1969 and 1982 PGA Championships; the 1976 Masters; and the 1986 U.S. Open. He ranks among the oldest players to have won a major. In addition, he came very close to becoming the first player to have won major championships in four different decades, most notably at The Masters in 1990, where he lost a playoff with Nick Faldo.

Floyd's successful run continued after he became eligible to compete on the Senior PGA Tour, now the Champions Tour, in 1992, with 14 wins between 1992 and 2000, including four senior majors and two Senior Tour Championships.

In addition to his victories on these two main tours, Floyd won at least 24 additional tournaments around the world, taking his total victory tally to at least 60 events.

Secure Raymond Floyd for Your Event

Based on your interest in Raymond Floyd as a speaker or for a personal appearance, Direct Sportslink has provided you additional links below for other sports talent with similar appearance fees, speaker topics, and categories that match Raymond Floyd.