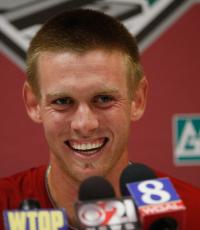 He was named an All Star in his rookie year (2012)
Fee Range: Contact Us
Secure Stephen Strasburg
for Your Event

Strasburg made his professional debut on October 16, 2009, starting for the Phoenix Desert Dogs in the Arizona Fall League at Phoenix Municipal Stadium. Before the 2010 season started, Baseball America named Strasburg as the top pitching prospect in baseball.

Strasburg was assigned to the Double-A Harrisburg Senators to begin his minor league career. There was so much anticipation and hype surrounding Strasburg that there were about 70 credentialed media members in attendance at his April 11, 2010 debut, and ESPN nationally broadcast portions of the game. He won that debut in Altoona, Pennsylvania, versus the Altoona Curve, allowing four hits and four runs (one earned), while striking out eight batters in five innings.

On May 4, 2010, he was promoted to the Triple-A Syracuse Chiefs. In his first game with the Chiefs, he pitched six scoreless innings, striking out six batters while allowing one hit and one walk. That game had the highest attendance in the 135-year history of baseball in Syracuse.

Strasburg made his major-league debut on June 8, 2010, against the Pittsburgh Pirates. A Sports Illustrated columnist termed it "the most hyped pitching debut the game has ever seen." Strasburg picked up the win in his debut, pitching seven innings, allowing two earned runs and no walks and 14 strikeouts, setting a new team strikeout record. Further, he was the first pitcher in history to strike out at least eleven batters without issuing any walks in his pro debut, while falling just one strikeout short of the all-time record for a pitcher's debut. Strasburg was featured in the cover story of Sports Illustrated following his second start.

Secure Stephen Strasburg for Your Event

Based on your interest in Stephen Strasburg as a speaker or for a personal appearance, Direct Sportslink has provided you additional links below for other sports talent with similar appearance fees, speaker topics, and categories that match Stephen Strasburg.