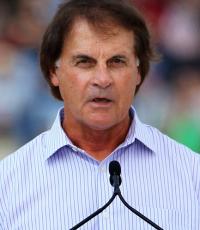 He was the manager for three World Series Championship teams
Fee Range: $20,000 - $30,000
Secure Tony LaRussa
for Your Event

As a player, La Russa made his major league debut with the Kansas City Athletics in 1963. He spent parts of five other seasons in the major leagues, playing for the Kansas City/Oakland Athletics, Atlanta Braves, and Chicago Cubs. His final big-league appearance came in 1973 with the Cubs.

La Russa was named manager of the White Sox in the middle of the 1979 season. In 1983 he led the White Sox to an American League West division title. La Russa was hired to manage the Athletics in 1986, and led the team to three American League championships and the 1989 World Series title. He left Oakland following the 1995 season to manage the Cardinals, and led the team to three National League championships and the 2006 and 2011 World Series titles. On October 31, 2011, he announced his retirement three days after winning the 2011 title and after 33 seasons as a major league manager. He ended is managerial career with 5097 games managed with 2728 games won.

If you are searching for a baseball motivational speaker, Tony La Russa has been involved with the game of professional baseball for over forty years and has the experience as a leader, winner, and the stories to share that will captivate your audience. He knows about adapting to change, the challenges of staying on top, and how to handle personnel to make a team better.

Secure Tony LaRussa for Your Event

Based on your interest in Tony LaRussa as a speaker or for a personal appearance, Direct Sportslink has provided you additional links below for other sports talent with similar appearance fees, speaker topics, and categories that match Tony LaRussa.