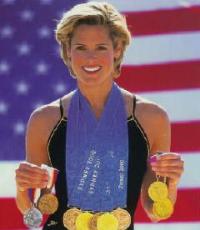 She is one of the most accomplished female swimmers; She has won numerous Olympic medals
Fee Range: $20,000 - $30,000
Secure Dara Torres
for Your Event

Since her first international race at the age of 14, Dara Torres has proven that she is far from your average athlete. As a student at the University of Florida, she earned the maximum possible number of 28 NCAA All-American swimming awards. As the first US swimmer to compete in four Olympic Games, Dara set three World records and won nine Olympic medals, including four gold. In the Sydney Olympic Games alone, after a seven-year break from competitive swimming, Dara won gold in the 400m freestyle and 400m MR and bronze in the 50m freestyle, 100m freestyle, and the 100m butterfly.

After the 2000 Olympics, Dara retired again to start a family, but dove right back into swimming in the 2006 Masters Nationals where she broke a world record, just three weeks after her daughter's birth. And in August 2007 Dara won another National title and broke her own 7 year old American Record in the 50 Freestyle. In 2008, Torres won three silver medals at the Beijing Olympics.

Outside of swimming, Dara has made a name for herself as a TV commentator and a print model and was the first athlete to appear in the Sports Illustrated swimsuit issue in 1994. She was a feature correspondent for Good Morning America, worked on-air for ESPN, TNT and Fox News Channel including stints on NHL Cool Shots and Fox Sports Sunday.

In 2005, Torres was inducted into the International Jewish Sports Hall of Fame. She has released a couple of inspirational memoirs including Age Is Just a Number, and Gold Medal Fitness.  Torres has also been a veteran celebrity swimmer for Swim Across America.

Secure Dara Torres for Your Event

Based on your interest in Dara Torres as a speaker or for a personal appearance, Direct Sportslink has provided you additional links below for other sports talent with similar appearance fees, speaker topics, and categories that match Dara Torres.