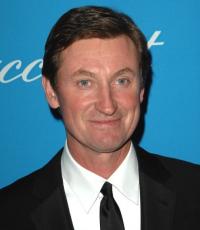 Nicknamed "The Great One" he is the first NHL player to total over 200 points in a season, a feat he accomplished four times
Fee Range: $75,000 - $100,000
Secure Wayne Gretzky
for Your Event

Wayne  Gretzky is a Canadian former professional ice hockey player and former head coach. He played 20 seasons in the National Hockey League (NHL) for four teams from 1979 to 1999. Nicknamed "The Great One", he has been called "the greatest hockey player ever" by many sportswriters, players, and the NHL itself. He is the leading point-scorer in NHL history, as well as the only NHL player to total over 200 points in one season – a feat he accomplished four times. At the time of his retirement in 1999, he held 40 regular-season records, 15 playoff records, and six All-Star records. In addition to being its greatest scorer, Gretzky was the most gentlemanly superstar in the modern history of the NHL. He won the Lady Byng Trophy for sportsmanship and performance five times, and he often spoke out against fighting in hockey.

In 1978, he signed with the Indianapolis Racers of the World Hockey Association (WHA), where he briefly played before being traded to the Edmonton Oilers. When the Oilers joined the NHL, he established many scoring records and led his team to four Stanley Cup championships. His trade to the Los Angeles Kings on August 9, 1988, had an immediate impact on the team's performance, eventually leading them to the 1993 Stanley Cup Finals, and he is credited with popularizing hockey in California. Gretzky played briefly for the St. Louis Blues before finishing his career with the New York Rangers. Gretzky captured nine Hart Trophies as the most valuable player, ten Art Ross Trophies for most points in a season, five Lady Byng Trophies, five Lester B. Pearson Awards, and two Conn Smythe Trophies as playoff MVP.

After his retirement in 1999, he was immediately inducted into the Hockey Hall of Fame, making him the most recent player to have the waiting period waived. The NHL retired his jersey number 99 league-wide, making him the only player to receive this honor. He was one of six players voted to the International Ice Hockey Federation's (IIHF) Centennial All-Star Team. Gretzky became executive director for the Canadian national men's hockey team during the 2002 Winter Olympics, in which the team won a gold medal. In 2000, he became part owner of the Phoenix Coyotes, and following the 2004–05 NHL lockout he became the team's head coach.

Secure Wayne Gretzky for Your Event

Based on your interest in Wayne Gretzky as a speaker or for a personal appearance, Direct Sportslink has provided you additional links below for other sports talent with similar appearance fees, speaker topics, and categories that match Wayne Gretzky.