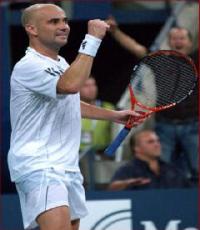 He is one of the best tennis players ever; He is one of a select few to win all 4 Grand Slam singles events during his career
Fee Range: Above $100,000
Secure Andre Agassi
for Your Event

Andre Agassi is a former World No. 1 professional tennis player from the United States who won eight Grand Slam singles tournaments and an Olympic gold medal in singles. He is one of a limited number of male players to have won all four Grand Slam singles events during his career.

Because of sciatica caused by two bulging discs in his back, a spondylolisthesis (vertebral displacement), and a bone spur that interferes with the nerve, Agassi retired from professional tennis on September 3, 2006.  Agassi earned more than US$30 million in prize-money throughout his career.

In demand as a speaker, Andre Agassi has a passion for philanthropy. Andre lives in

so a motivational speaker or keynote guest speaker event at one of the many conventions or trade shows would be ideal.

Now retired from professional men's tennis, Agassi makes numerous appearances in support of the many charity organizations he is involved with, including his Andre Agassi Charitable Foundation.

One of Agassi's most famous commercial endorsements was with Canon, where he left us with the lasting impression "image is everything." Other Andre Agassi endorsements have included Adidas, American Express, and Nike.

Secure Andre Agassi for Your Event

Based on your interest in Andre Agassi as a speaker or for a personal appearance, Direct Sportslink has provided you additional links below for other sports talent with similar appearance fees, speaker topics, and categories that match Andre Agassi.