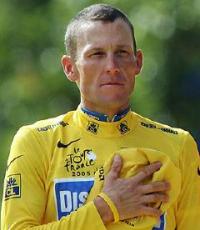 He is considered one of the greatest athletes ever, having won a record seven consecutive Tour de France competitions; He is a cancer survivor with a worldwide mission dedicated towards fighting against cancer
Fee Range: Above $100,000
Secure Lance Armstrong
for Your Event

Lance Armstrong won the Tour de France, cycling's most prestigious race, seven consecutive times, from 1999 to 2005. In doing so, he beat the previous records of five wins by Miguel Indurain (consecutive) and Bernard Hinault, Eddy Merckx and Jacques Anquetil. Previous to this achievement he also survived testicular cancer, a germ cell tumor that metastasized to his brain and lungs in 1996. His cancer treatments included brain and testicular surgery, and extensive chemotherapy.

Armstrong's athletic success and dramatic recovery from cancer inspired him to commemorate his accomplishments, with Nike, through the Lance Armstrong Foundation, a charity founded in 1997. The foundation's yellow rubber "Livestrong" wristbands, first launched in 2004, have been a major success, netting the foundation more than $60 million dollars in the fight against cancer, while helping Armstrong become a major player in the nonprofit sector.

Lance Armstrong is one of the most popular motivational keynote speakers today. His performance as a rider in Tour de France competitions ranks with the greatest accomplishments of any sports celebrity. His story of overcoming cancer and returning to racing to win the Tour de France is one of extreme courage and will motivate your audience.

Secure Lance Armstrong for Your Event

Based on your interest in Lance Armstrong as a speaker or for a personal appearance, Direct Sportslink has provided you additional links below for other sports talent with similar appearance fees, speaker topics, and categories that match Lance Armstrong.