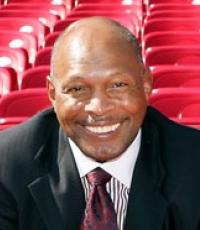 Called by Ohio State Coach Woody Hayes "the greatest player I've ever been associated with," Archie Griffin is the only player ever to win the Heisman Trophy twice, in 1974 and 1975. He also won the 1975 Maxwell Trophy as the nation's outstanding college player.

Griffin set an NCAA record by rushing for more than 100 yards in 31 consecutive games. During four years as a starter, he gained 5,1777 yards on 845 attempts, a 6.1 average. He was the first player to rush for more than 5,000 career yards.

He joined the NFL's Cincinnati Bengals in 1975 and played for them through the 1982 season, then retired because of injuries. Griffin made a brief comeback with the Jacksonville Bulls of the U. S. Football League in 1985 but retired again after carrying the ball only 10 times.

Secure Archie Griffin for Your Event

Based on your interest in Archie Griffin as a speaker or for a personal appearance, Direct Sportslink has provided you additional links below for other sports talent with similar appearance fees, speaker topics, and categories that match Archie Griffin.