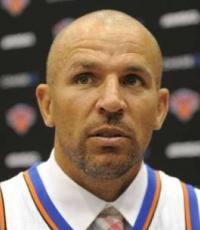 He is considered one of the best players of his generation and one of the greatest playmakers in NBA history
Fee Range: $40,000 - $50,000
Secure Jason Kidd
for Your Event

After graduating from St. Joseph Notre Dame High School in Alameda, California, Kidd attended the University of California, Berkeley for two years before opting to enter the NBA Draft in 1994.

He was selected as the second pick overall by the Dallas Mavericks. As a member of the "Three J's" in Dallas along with Jim Jackson and Jamal Mashburn, and it was hoped that the trio would lead Dallas for years to come; however, that plan was not to come to fruition, as all three found themselves playing for other teams shortly thereafter. Kidd was subsequently traded to the Phoenix Suns along with Tony Dumas and Loren Meyer for Michael Finley, A.C. Green, and Sam Cassell during the 1996-1997 season and later to the New Jersey Nets for Stephon Marbury.

The 2001-02 season saw Kidd finish second to the San Antonio Spurs' Tim Duncan in MVP voting. His contribution to the Nets during his first season in New Jersey was huge, and resulted in one of the greatest turnarounds in NBA history. He has led the New Jersey Nets to two NBA Finals appearances. He retired from the NBA in 2013. He was named Head Coach of the Brooklyn Nets in June of 2013. He was named Head Coach of the Milwaukee Bucks in 2014.

Secure Jason Kidd for Your Event

Based on your interest in Jason Kidd as a speaker or for a personal appearance, Direct Sportslink has provided you additional links below for other sports talent with similar appearance fees, speaker topics, and categories that match Jason Kidd.