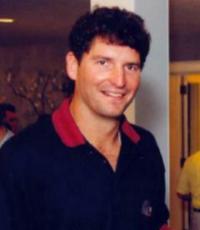 He quarterbacked the University of Miami to a NCAA Championship in 1983; He was drafted by the Cleveland Browns and is one of the most popular players in Browns history
Fee Range: $20,000 - $30,000
Secure Bernie Kosar
for Your Event

Kosar played the University of Miami, where he started 12 games as a freshman in 1983. He led the Hurricanes to a 11-1 regular season and a berth in the Orange Bowl against top-ranked Nebraska, which had won 22 consecutive games. In the game, Kosar passed for 300 yards and two touchdowns, and the Hurricanes topped the Cornhuskers 31-30 for Miami's first national championship.

Now a national celebrity, Kosar did not disappoint in 1984. He set Hurricane records with 3,642 yards and 25 touchdowns, was a second-team All-American and finished fourth in Heisman Trophy voting. Kosar's career completion percentage of 62.3 percent is still a Hurricanes record.

Kosar's was selected by the Cleveland Browns, and was an immediate fan favorite. His friendliness with fans and on-field performance would make him one of the most-popular players in team history. He later also played for the Dallas Cowboys and Miami Dolphins.

Kosar finished his 12-season career with 1,994 completions in 3,365 attempts for 23,301 yards and 124 touchdowns, with 87 interceptions. He also rushed for 265 yards and five touchdowns. He also held the NFL record for most consecutive completed passes without an interception, until December 26, 2010, when Tom Brady broke his record.

Secure Bernie Kosar for Your Event

Based on your interest in Bernie Kosar as a speaker or for a personal appearance, Direct Sportslink has provided you additional links below for other sports talent with similar appearance fees, speaker topics, and categories that match Bernie Kosar.