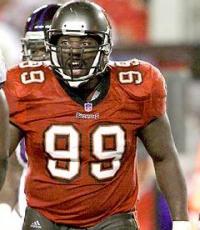 He was a tenacious pass rusher who played an integral part of the Buccaneers' Super Bowl XXXVII victory; He is a member of the Pro Football Hall of Fame
Fee Range: $20,000 - $30,000
Secure Warren Sapp
for Your Event

After playing college football at the University of Miami, where he was a defensive standout, Sapp was drafted into the NFL by the Tampa Bay Buccaneers in the first round of the 1995 draft. Upon joining Tampa Bay, Sapp was almost immediately given the starting job at the position of right defensive tackle and finished his rookie season with 27 tackles and one interception.

Sapp continued to be a prolific, intimidating tackler for the Buccaneers, tallying 51 tackles and nine sacks in 1996 and 58 tackles and 10.5 sacks in 1997. In 1997, Sapp was named to his first Pro Bowl. It was the first of seven straight selections. Sapp was named to the NFL 1990's All-Decade Team. Sapp was also a four-time AP First-Team All-Pro, a two-time AP Second-Team All-Pro, and the 1999 NFL Defensive Player of the Year.

Sapp's 96.5 career sacks are the second-highest career total sacks for a defensive tackle and the 28th highest overall for a defensive lineman. His 77 sacks with the Buccaneers is second in the team's history. In 2002, Sapp helped lead a resurgent Tampa Bay team to victory in Super Bowl XXXVII over the Oakland Raiders. Sapp had five tackles and two sacks during the 2002-2003 postseason.

Sapp has been a studio analyst for Inside the NFL on Showtime and a NFL analyst for the NFL Network. In 2007 he was runner-up on Season 7 of Dancing With The Stars. in 2013, he was elected to the Pro Football Hall of Fame.

Secure Warren Sapp for Your Event

Based on your interest in Warren Sapp as a speaker or for a personal appearance, Direct Sportslink has provided you additional links below for other sports talent with similar appearance fees, speaker topics, and categories that match Warren Sapp.