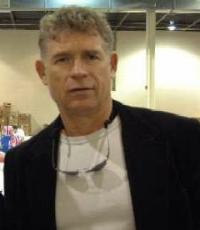 Riggins, played for the University of Kansas, where he broke Gale Sayers' career rushing record for the school. He was the first-round draft pick for the New York Jets in the 1971 draft. He spent five years with the Jets as he became the New York Jets MVP in 1972 and 1975. In that 1975 season, he was the first Jet to rush for 1,000 yards in a season. He was eventually being signed as a free agent by the Washington Redskins in 1976 where he had great success.

Riggins was known for his hard running style and tough demeanor. He has a career 11,352 yards rushing and 2,090 yards receiving, giving him 13,435 combined yards, among the best ever for a running back. He also scored 104 rushing TDs (116 total) during his career; Riggins scored 24 touchdowns during the 1983 season, a record which stood for 12 years.

Since retiring from professional football, Riggins has worked as a sports commentator on television and radio, and is a popular sports figure in the Washington D.C. area.

Secure John Riggins for Your Event

Based on your interest in John Riggins as a speaker or for a personal appearance, Direct Sportslink has provided you additional links below for other sports talent with similar appearance fees, speaker topics, and categories that match John Riggins.