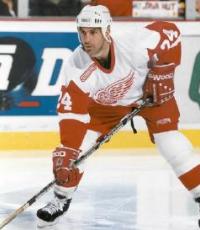 He is a three-time U.S. Olympic team captain; He won two Stanley Cups and is considered one of the best NHL Defensemen ever
Fee Range: $20,000 - $30,000
Secure Chris Chelios
for Your Event

Chris Chelios is a retured defenseman for the Detroit Red Wings of the NHL. He has earned many awards during his long career, and is considered one of the best Americans to ever play in the NHL. With the retirement of Mark Messier, Chelios has became the oldest active player in the NHL.

In 1984, he earned a trip to the National Hockey League All-Star Game and was named to the 1985 NHL All-Rookie Team. Although he only played 41 games in the 1985-1986 season, he won his first Stanley Cup, playing in front of Conn Smythe Trophy winner Patrick Roy.

Following two more good seasons, Chelios really broke out in the 1988-1989 season. He was named to the All-Star First-Team, and won the James Norris Memorial Trophy. After he only played 53 games in the next season, on June 29, 1990, he was traded to the Chicago Blackhawks with a 2nd-round draft pick for Denis Savard, who is now in the Hockey Hall of Fame.

In his first season with Chicago, he earned a spot on his second NHL All-Star Team. In the 1992-1993 season, he won another Norris Trophy. In 1996, he would win it again. All told, he won two Norris Trophies, was named to 3 First All-Star Teams and 2 Second All-Star Teams, and played in 6 All-Star Games as a Blackhawk. He was captain of the Blackhawks from 1995 to 1999.

In 1999, he was traded to the Detroit Red Wings for Anders Eriksson and two first-round draft picks. The move to Detroit helped keep Chelios playing at close to his peak level. In 2002, he was again named to the First All-Star Team. He also led the United States hockey team to a silver medal in the 2002 Winter Olympics, and was named to the Tournament's All-Star Team. His season culminated in the Red Wings' victory over the Carolina Hurricanes in the Stanley Cup Finals, giving Chelios his second Stanley Cup.

August 4, 2005, the 43-year-old defenseman re-signed with the Red Wings for a one-year contract. On February 1, 2006, Chelios was again named captain of the US Olympic Hockey Team. Chelios was also captain in the 1998 Nagano games and of the silver-medal-winning team in the 2002 Salt Lake City games.

Over his career, he played in 11 All-Star games and was named to 7 NHL First or Second All-Star Teams. Even with his career tapering off, he has proved that he can play an important role for a Stanley Cup-winning team. All in all, Chelios has secured a legacy as one of the most decorated Americans to ever play in the NHL, and is considered by some to be the greatest American ever to play hockey. As of 2012, he was working in a front office position with the Red Wings.

Secure Chris Chelios for Your Event

Based on your interest in Chris Chelios as a speaker or for a personal appearance, Direct Sportslink has provided you additional links below for other sports talent with similar appearance fees, speaker topics, and categories that match Chris Chelios.