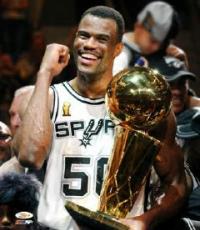 He won two NBA Championships with the San Antonio Spurs; He is widely regarded as one of the best centers to ever play in the NBA
Fee Range: $50,000 - $75,000
Secure David Robinson
for Your Event

David Robinson is considered one of the greatest to ever play basketball. A born-again Christian, Robinson is also an amateur musician who enjoys playing various instruments at home. His nickname is "The Admiral", based on his service as an officer in the United States Navy.

He played NCAA basketball at the Naval Academy. In his last two years, he was a consensus All-American, and won college basketball's two most prestigious player awards, the Naismith and Wooden Awards. Robinson was a #1 overall NBA Draft pick and joined the San Antonio Spurs for the 1989-1990 season.

Robinson made the 1992 US Olympic Dream Team that won the gold medal at the Barcelona Olympics, and he scored 71 points against the Clippers in the last game of the season to win the league scoring title over Shaquille O'Neal in 1994. Robinson went on to win the NBA's MVP trophy in 1995, and in 1996 he was named one of the 50 Greatest Players in NBA History. The Spurs won the NBA Championship in the 1998-1999 season.

Robinson announced he would retire from basketball after the 2003 campaign and, in the Spurs' case, playoffs. On June 15, 2003, in what could perhaps be called a fitting finale to Robinson's career: the Spurs won the 2003 NBA championship with an 88-77 victory over the New Jersey Nets in Game Six of the 2003 NBA Finals.

Secure David Robinson for Your Event

Based on your interest in David Robinson as a speaker or for a personal appearance, Direct Sportslink has provided you additional links below for other sports talent with similar appearance fees, speaker topics, and categories that match David Robinson.