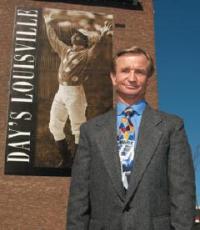 He is a member of the National Museum of Racing and Hall of Fame; He is a four time Eclipse Award winner
Fee Range: $5,000 - $10,000
Secure Pat Day
for Your Event 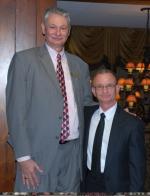 Hotel Louisville was searching for a high profile jockey within their limited budget to make an appearance the evening before the Kentucky Derby. Pat Day gave a motivational dinner speech and met all the guests, taking pictures and signing autographs. The perfect evening to kick off a Derby celebration weekend.

A Pat Day personal appearance, Pat Day speaking engagement, or Pat Day endorsement will reflect well on your company. To hire Pat Day now for any corporate appearance, fundraiser, motivational speaker event, personal appearance, autograph signing, or website endorsement please contact our celebrity agents at 1-877-6-SPORTS. We will contact Pat Day or contact Pat Day's agent and provide you with the booking fees and availability immediately upon your request. Direct Sportslink is the only sports speakers bureau and talent booking agency based in the United States securing only sports talent for corporations, associations, and organizations for motivational speaking engagements, personal appearances, and endorsements. We are the premier sports celebrity booking agency and a sports celebrity procurement expert. Accordingly, we will provide you with any relevant Pat Day website information and booking agent details so that you can hire Pat Day for your next event.

Day a four-time Eclipse Award winner also received the George Woolf Memorial Jockey Award in 1985, given annually to a North American jockey who demonstrates the highest standards of professional and personal conduct.

In 1991, Pat Day won the Canadian Triple Crown and the Breeders' Cup Distaff aboard the future Hall of Fame filly Dance Smartly. He is the only jockey to have ridden at least one mount in each of the first 20 Breeders' Cups, and ranks second all-time in Breeders' Cup winners, with 12:

In 1989, he set a North American record when he won eight of nine mounts in a single day at Arlington Park.

After undergoing hip surgery that forced him to miss the Derby for the first time in 21 years, Day announced his retirement on August 3, 2005 after a 32-year career that saw him ride 8,804 winners, fourth on the all-time list, and set a North American record for prize money won, with his mounts earning nearly USD 298 million.

Secure Pat Day for Your Event

Based on your interest in Pat Day as a speaker or for a personal appearance, Direct Sportslink has provided you additional links below for other sports talent with similar appearance fees, speaker topics, and categories that match Pat Day.