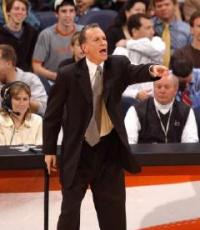 Doug Collins would be the ideal basketball speaker for a basketball sports camp or basketball banqet due to his extensive NBA background. He has played in the NBA, coached in the NBA and been a television analyst for the NBA games.

Collins enjoyed a successful high school basketball career in Benton, Illinois, after which he went on to become one of the best college basketball players in the country. He chose to play for a college that was close to where he grew up, attending Illinois State University beginning in 1969.

Collins was chosen to represent the United States at the infamous 1972 Summer Olympics in Munich, Germany. Those games are mainly remembered for two things: The terrorist attack that left several Israeli athletes dead, and the gold medal basketball game between the United States and the Soviet Union. The United States was undefeated in Olympic basketball competition history, and widely expected to remain undefeated after these Olympics. After Collins had hit two free throws, the time had apparently expired in the gold medal game; the United States had a 50-49 lead and seemed to have secured yet another gold medal. However, in a very controversial move, it was decided by the game's referees that there were still three seconds left to play, allowing the Soviets one more chance, which they utilized to make a lay-up. This gave the U.S. its first ever Olympic loss by a 51-50 margin.

Collins later on resurfaced as head coach of the Chicago Bulls from the middle to the late 1980s, where he coached Michael Jordan.

Collins was named the head coach of the Detroit Pistons in 1995, for whom he served until 1997 when he was fired at the end of the season and replaced by Alvin Gentry. Collins then became a television broadcaster, working for many years at various networks, such as NBC and TNT. He worked as a broadcaster for about five years, before being hired to coach again, by the Washington Wizards, before the start of the 2001-02 NBA season. Collins was names the head coach of the 76ers in 2010 and resigned in 2013 to work with teh team as an advisor.

Secure Doug Collins for Your Event

Based on your interest in Doug Collins as a speaker or for a personal appearance, Direct Sportslink has provided you additional links below for other sports talent with similar appearance fees, speaker topics, and categories that match Doug Collins.