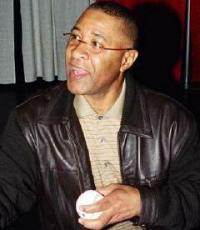 He is a member of the Baseball Hall of Fame; He is one of the best shortstops to ever play professional baseball
Fee Range: $20,000 - $30,000
Secure Ozzie Smith
for Your Event

Smith broke in with the San Diego Padres, and then was traded to the St. Louis Cardinals in 1982. He promptly led the team to the World Series championship in his first year, defeating the Milwaukee Brewers 4 games to 3. The team reached the World Series again in 1985, thanks in large part to a game winning home run Smith hit in the NLCS against the Los Angeles Dodgers.

His real asset was his glove in which he won 13 Gold Gloves. In his 18 year career, he was named an All-Star 15 times, received a silver slugger award in 1987, received the Roberto Clemente award in 1995, named NLCS MVP in 2005, and had his jersey retired by the Cardinals (#1).

Ozzie's greatest season came in 1987, when he had a .303 batting average, 43 stolen bases, 75 RBIs, 104 runs scored, and 40 doubles en route to helping the Cardinals get into the playoffs, although he did not hit a home run that season. In 2002, Smith is only the 37th player of the 252 elected to the Hall of Fame to date to be so honored in his first year of eligibility. He finished his career with 2,460 hits, 580 stolen bases and a batting average of .262.

In 1999, he ranked Number 87 on The Sporting News' list of the 100 Greatest Baseball Players, and was nominated as a finalist for the Major League Baseball All-Century Team. He has started many other business adventures including Ozzie's Restuarant and starting a youth academy.

Secure Ozzie Smith for Your Event

Based on your interest in Ozzie Smith as a speaker or for a personal appearance, Direct Sportslink has provided you additional links below for other sports talent with similar appearance fees, speaker topics, and categories that match Ozzie Smith.