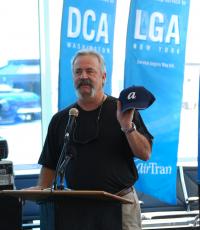 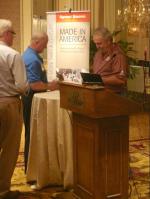 Alliance Laundry Systems hired Direct Sportslink to secure Gorman Thomas for their sales meeting in Milwaukee. A Brewers legend, Gorman was a great fit for the client. Gorman talked to the guests and signed autographs after his speech.

One of the most popular players in Brewers history, and affectionately known as "Stormin' Gorman", Thomas hit more home runs during the period 1978-1983 than any other player in the American League with 197.

In 1982, Thomas hit an AL-high 39 home runs and drove in 112 runs to help the Brewers win the American League Championship and face the Cardinals in the World Series. Ultimately, the Brewers lost to the Cardinals in seven games. During the next season, he was involved in a trade that sent him to the Indians. He also played with the Mariners and returned to Milwaukee in 1986 for a last run.

After his playing career finished, he worked for the Brewers to make appearances in the community and welcome visitors to Gorman's Grill at Miller Park. Thomas was elected to the Wisconsin Athletic Hall of Fame in 2003.

Secure Gorman Thomas for Your Event

Based on your interest in Gorman Thomas as a speaker or for a personal appearance, Direct Sportslink has provided you additional links below for other sports talent with similar appearance fees, speaker topics, and categories that match Gorman Thomas.