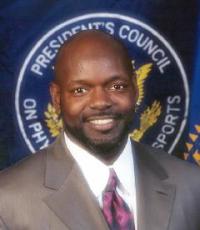 He was inducted into the Pro Football Hall of Fame in 2010; He helped the Dallas Cowboys win three Super Bowls
Fee Range: $40,000 - $50,000
Secure Emmitt Smith
for Your Event 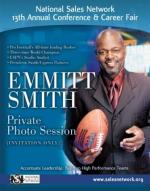 Direct Sportslink's client, NSN, was looking for an African American speaker who could motivate young professionals and career minded individuals looking for the extra advantage. Emmitt Smith was the ideal keynote motivational speaker to talk about achieving your goals and dreams, using your potential to your maximum ability, and sharing the focus it takes to be the best. To hire Emmitt Smith for any personal appearance, motivational speaking engagement, or endorsement please contact a Direct Sportslink booking agent for immediate Emmitt Smith quote on his appearance fee and availability.

Emmitt Smith attended the University of Florida and by the end of his first season, Emmitt had rushed for 1,341 yards, and led the SEC. At the end of his three years at Florida he had scored 36 touchdowns, had 23 100-yard rushing games, and was a NCAA All-American.

Emmitt was drafted by the Dallas Cowboys in the first round of the 1990 draft. Over the next twelve years Emmitt was able to help lead the Cowboys to three Super Bowl Championships, lead the NFL in rushing four times, was the league MVP in 1993, MVP of Super Bowl XXVII and made eight Pro Bowl appearances. In addition, Emmitt was the first player in NFL history to rush for over 1,000 yards in 11 consecutive seasons and on October 27, 2002 he surpassed Walter Payton's All-Time Leading Rushing Record of 16,726 yards and became the NFL's All-Time Leading Rusher. On September 19, 2005 Emmitt was added to the Cowboys Ring of Honor along with his former teammates Troy Aikman and Michael Irvin. Other members include Drew Pearson, Charles Haley, Roger Staubach, Bob Lilly, Mel Renfro, Tony Dorsett, and Randy White.

In 2006, Emmitt was inducted into the College Football Hall of Fame and in 2010, he was inducted into the Pro Football Hall of Fame.  Smith has been a studio analyst for several networks including the NFL Network and ESPN. He was also the winner of season 3 Dancing with the Stars. Smith co-founded ESmith Legacy, a company that specializes in commercial real estate development and investment management.

Secure Emmitt Smith for Your Event

Based on your interest in Emmitt Smith as a speaker or for a personal appearance, Direct Sportslink has provided you additional links below for other sports talent with similar appearance fees, speaker topics, and categories that match Emmitt Smith.