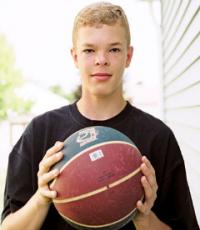 He is best known for having autism and scoring 20 points in a high school game in 4 minutes inspiring millions of people
Fee Range: $10,000 - $20,000
Secure Jason McElwain
for Your Event

Saint Joseph’s University’s Kinney Center for Autism Education and Support hired Direct Sportslink to secure Jason McElwain as the keynote speaker for the University’s 8th Annual Autism Awareness Day.  His message was one of inspiration that "if you set your mind to anything and work hard enough to achieve your goals you can be very successful." To hire jason for any autism speaker related event or any health and wellness initiative with a focus on autism please contact a Direct Sportslink booking agent for Jason McElwain's speaker fee and availability.

Nicknamed "J-Mac," McElwain was diagnosed with autism at a young age, and he did not talk until he was five years old. As a child, he had trouble interacting with other kids, but during his teenage years he began to develop social skills and make friends. McElwain had a passion for basketball, so Greece Athena High School basketball coach Jim Johnson appointed him manager of the team.

On February 16, 2006, Greece Athena was playing Spencerport High School for a division title. Greece Athena got a large lead, so Johnson decided to let McElwain play in the last four minutes. After initially missing two shots, McElwain made six three-point shots and one two-pointer. After the final buzzer rang, the crowd dashed onto the court in celebration of McElwain's amazing game.

McElwain won an ESPY Award for the Best Moment in Sports in 2006. To win that award, McElwain beat out Kobe Bryant's 81-point-game and the George Mason Patriots' run to the Final Four. The speech that Jason gave upon winning the award was written for him by his older brother. The theme of the speech was about dreams coming true.

Following his rise to fame, Jason McElwain wrote a book titled The Game of My Life. The book is written mainly by Jason, but includes sections written by his family, coach, and teammates. Editorial reviews were left by celebrities such as Magic Johnson, Doug Flutie, and Tony Dungy.

Secure Jason McElwain for Your Event

Based on your interest in Jason McElwain as a speaker or for a personal appearance, Direct Sportslink has provided you additional links below for other sports talent with similar appearance fees, speaker topics, and categories that match Jason McElwain.