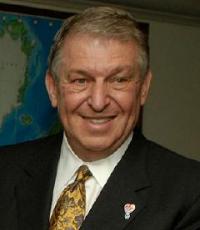 He is recognized as a Champion, Pioneer, and Innovator; Four-time recipient of the NBA Executive of the Year Award
Fee Range: $20,000 - $30,000
Secure Jerry Colangelo
for Your Event

Jerry Colangelo has been recognized as a "Champion, Pioneer, and Innovator' in sports and business by national and international media. He is well known as "one of the shrewdest buinessmen" in sports.

From a working class kid in a poor ethnic community "Hungry Hill" in Chicago Heights to a phenomenally successful entrepreneur, Jerry Colangelo has proven what's possible when you dream about something and work to achieve it.

Jerry Colangelo is Chairman of USA Basketball's Board of Directors for the 2009-2012 term.  He was appointed as the first Managing Director of the USA Basketball Men's Senior National Team program from 2005-2008. Colangelo assembled the players and coaches for the "Redeem Team", who returned USA Basketball to Olympic glory and claimed the gold medal at the 2008 Olympic Games in Beijing.

Colangelo spent two seasons with the Chicago Bulls as a marketing director, scout, and assistant to the president before moving to the Valley to help start the expansion Phoenix Suns. He took over the expansion Suns franchise as the youngest general manager in professional sports and has since guided the Suns into one of the most successful organizations in the NBA.

The former Chairman of the NBA's Board of Governors, Colangelo has had a major influence on the growth of the NBA. He was instrumental in the startup of the WNBA, supporting the advancement of women in basketball.

He brough Major League Baseball to Phoenix in 1998 and served as the Chairman and CEO of the 2001 World Series Champion Arizona Diamondbacks. Going from an expansion team to the World Champion in just four years in baseball was a record in Major League Baseball. In 1996, Colangelo was the key element in facilitating the move of the NHL's Winnipeg Jets to the Valley of the Sun to become the Phoenix Coyotes. Jerry played a vital role in development of the US Airways Arena and Chase Field.

Colangelo has often been listed in the top 100 most powerful people in sports by The Sporting News and Business Week.

His contributions to charity and community organizations have been profound. He supports organizations such as The Boys and Girls Clubs of America, Young Life, Mentor Kids, and United Way to name a few. The Valley of the Sun United Way has bestowed its highest honor, the Spirit of Caring Award, to Colangelo for his passion for improving the lives in the community. Recently, he was named Hummanitarian of the Year by Sinai Institute.

He has authored the book entitled 'How You Play the Game" where he gives insight into the world of business and his own life. In the book entitled "Return to Gold", written by Dan Bickley, Colangelo shares compelling stories of his life and journey working with incredibile players of the Redeem Team.

He attended the University of Illinois, where he earned All-Big Ten Honors, and captained the Illini. Colangelo and his wife, Joan, have four children, six granddaughters and four grandsons.

Secure Jerry Colangelo for Your Event

Based on your interest in Jerry Colangelo as a speaker or for a personal appearance, Direct Sportslink has provided you additional links below for other sports talent with similar appearance fees, speaker topics, and categories that match Jerry Colangelo.