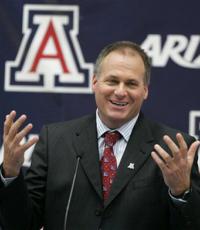 On November 26, 2000, WVU's athletic department announced that Rodriguez would be the Head Football Coach at the University of West Virginia. Following the 2002 season, Rodriguez was awarded the Big East Coach of the Year by Sporting News and state college coach of the year for all sports by the West Virginia Sports Writers Association. He also received the 2003 Frank Loria Award from the West Virginia chapter of the National Football Foundation.

Repeating off of their 2005 success, West Virginia posted another 11-win season, which was the first consecutive 10-win seasons in school history. The Mountaineers defeated Georgia Tech, 38-35, in the Gator Bowl and finished 10th in the final polls.

Secure Rich Rodriguez for Your Event

Based on your interest in Rich Rodriguez as a speaker or for a personal appearance, Direct Sportslink has provided you additional links below for other sports talent with similar appearance fees, speaker topics, and categories that match Rich Rodriguez.