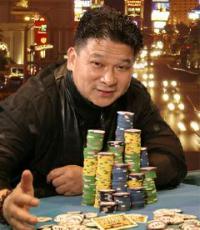 Johnny Chan may be poker's most well known name. More impressively is that two bracelets were from back to back Championship events in 1987 and 1988. Amazingly he almost won in 1989 too, but finished second to Phil Hellmuth. He is not only known by poker players, but also by movie goers for playing himself as in Rounders. The movie contained footage of Chan's victory against Erik Seidel in the 1988 World Series. Chan, nicknamed "The Orient Express", flopped a straight and got Erik to move all in with a pair of queens.

Chan moved with his family from Hong Kong to Phoenix in 1968. They later moved to Houston where his family owned some restaurants. He was expected to continue in the family business, but poker took him on a life detour. He started playing in the early 80's and hasn't looked back since. When he started playing poker, he also was an avid bowler. He used to hide some of his poker escapades by saying he was at the bowling alley.

The ten gold bracelets from the World Series of Poker are from the two Championship events in 1987 and 1988, Limit Holdem in 1985, Seven-Card Stud in 1994, Deuce to Seven Draw in 1997, Omaha Pot Limit in 2000, No Limit Holdem and Pot Limit Holdem in 2003, Pot Limit Omaha in 2005, and the other bracelet was from the Gold Bracelet Match Play in 2002. The event was a series of heads up matches between previous bracelet winners and the final two players were Chan and Phil Hellmuth Jr. This time Chan was victorious. The variety of games he has won validates what many say, that he is one of the best all around poker players. He was inducted into the Poker Hall of Fame in 2002.

Secure Johnny Chan for Your Event

Based on your interest in Johnny Chan as a speaker or for a personal appearance, Direct Sportslink has provided you additional links below for other sports talent with similar appearance fees, speaker topics, and categories that match Johnny Chan.