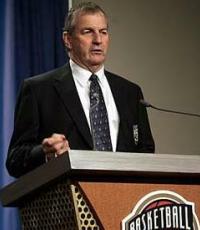 Currently, Coach Calhoun is the head coach of the University of Connecticut's men's basketball team. He has won four national titles, the 1999, 2004 and most recently 2011 NCAA titles, as well as the 1988 NIT championship. In 2005, he was enshrined in the Basketball Hall of Fame.

On May 15, 1986, Calhoun was named the head coach at the University of Connecticut. After completing his first season just under .500, Calhoun led the Huskies to their first national title in 1988, defeating Ohio State in the National Invitation Tournament. In 1990, Calhoun was named the consensus National Coach of the Year after leading the Huskies to the Elite Eight and a 31-6 record in only his fourth year at the helm.

Calhoun won his first NCAA national championship in 1999, as he led UConn to its first-ever Final Four and then championship game victory over Duke in St. Petersburg, Florida. The final score was 77-74 in UConn's favor as future NBA standout Richard "Rip" Hamilton lead the team to victory.

Calhoun led the Huskies to another national championship in 2004, at the conclusion of a season that saw UConn start and complete the year as the number one team in the nation. UConn standouts Emeka Okafor and Ben Gordon were selected #2 and #3 in the NBA Draft, respectively.

Coach Calhoun was one of a select few NCAA coaches to have won 3 NCAA Championships.

Secure Jim Calhoun for Your Event

Based on your interest in Jim Calhoun as a speaker or for a personal appearance, Direct Sportslink has provided you additional links below for other sports talent with similar appearance fees, speaker topics, and categories that match Jim Calhoun.