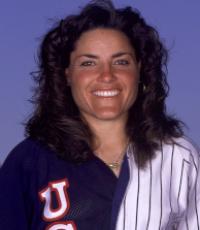 Lisa Speaking to the Guests

Direct Sportslink secured Lisa Fernandez for the Odessa Softball Association. The audience was younger female softball players, all with hopes of someday having the kind of success Lisa had during her playing days. A softball icon, Lisa shared motivational words of wisdom with the group of girls to inspire them in their career.

Lisa Fernandez, born February 22, 1971, in New York City, is a renowned softball pitcher of Cuban-Puerto Rican descent who established an Olympic record in softball with 25 strikeouts as a member of the United States Women Olympic Softball Team.

Upon graduating from high school, she was accepted to the University of California, Los Angeles, where she played softball and earned a degree in psychology.

She was a member of three U.S. Women's Olympic Gold medal winning teams in 1996, 2000, and 2004. Since retiring, she has spent much of her time coaching softball.

Secure Lisa Fernandez for Your Event

Based on your interest in Lisa Fernandez as a speaker or for a personal appearance, Direct Sportslink has provided you additional links below for other sports talent with similar appearance fees, speaker topics, and categories that match Lisa Fernandez.