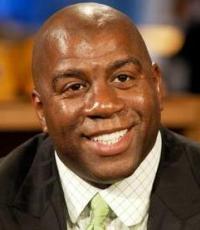 He is considered one of the best basketball players of all-time; He is well known for his business success after his playing career
Fee Range: Above $100,000
Secure Magic Johnson
for Your Event

The greatest game of Johnson's career arguably came in his rookie season: May 16, 1980, in Game 6 of the NBA Finals at Philadelphia. Filling in for the injured Kareem Abdul-Jabbar, Magic started the game at center and eventually played every position on the floor in a dominating performance. Scoring a game-high 42 points and grabbing a game-high 15 rebounds, he led the Lakers to the NBA crown, stunning Julius Erving a.k.a. "Dr. J", the Philadelphia 76ers, and a national television audience who came to understand the moniker "Magic".

His post-basketball business ventures include Magic Johnson Theatres, a nationwide chain of movie theaters whose complexes are primarily in urban locations. The chain is now a part of Loews Theatres. His name graces numerous TGI Friday's franchises as well as 24 Hour Fitness Magic Johnson Sport franchises, the flagship of which is in the Sherman Oaks Galeria. Additionally, he has started a private lending bank that specializes in giving micro loans to urban start ups.

In March 2012, Johnson's ownership group was announced as the winner of the proceedings to buy the Los Angeles Dodgers.

Secure Magic Johnson for Your Event

Based on your interest in Magic Johnson as a speaker or for a personal appearance, Direct Sportslink has provided you additional links below for other sports talent with similar appearance fees, speaker topics, and categories that match Magic Johnson.