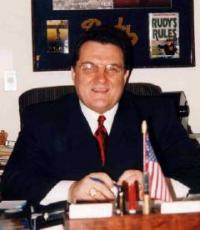 Daniel E. "Rudy" Ruettiger is a motivational speaker best known as the inspiration for the motion picture Rudy.

Ruettiger grew up in a middle class household; the third of fourteen children and the oldest boy. He attended Joliet Catholic High School, where he played for legendary coach Gordie Gillespie and led the team in tackles his junior and senior years. An October 1965 program from a state semi-final game against Decatur lists Ruettiger as the smallest linebacker in Illinois at the time. After graduating high school, Ruettiger served as a yeoman in the United States Navy and worked in a power plant before returning to school at Holy Cross Junior College in South Bend, Indiana.

After two years at Holy Cross, and three rejections to matriculate at the University of Notre Dame, Ruettiger was accepted as a student in the Fall of 1974. It was during his time studying at Holy Cross that Ruettiger discovered he suffered from dyslexia.

Rudy harbored a dream to play for Ara Parseghian and the Fighting Irish football team, despite being just 5'6" and 165 pounds. Ruettiger earned a place on the Notre Dame scout team, a practice-squad that helps the varsity team practice for games, where he was often injured.

After Parseghian stepped down, Dan Devine was named head coach. In his last opportunity to play for Notre Dame at home, Devine allowed Ruettiger to play against Georgia Tech on November 8, 1975. It was the final play of Rudy's senior season with the fighting Irish. Rudy recorded a sack and that is all his Notre Dame stat line has ever shown. Ruettiger was carried off the field by his teammates following the game. He graduated from Notre Dame in 1976 with a degree in Sociology.

Ruettiger's story has been told in the 1993 film Rudy. The film was written by Angelo Pizzo, directed by David Anspaugh and produced by Rob Fried, the award winning team who created Hoosiers. Actor Sean Astin portrays Rudy in the film, and Ruettiger himself has a cameo.

Secure Rudy Ruettiger for Your Event

Based on your interest in Rudy Ruettiger as a speaker or for a personal appearance, Direct Sportslink has provided you additional links below for other sports talent with similar appearance fees, speaker topics, and categories that match Rudy Ruettiger.