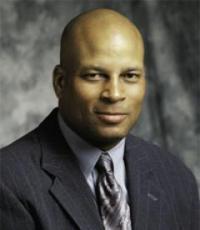 Ronnie spoke to Transamerica clients at their annual investment conference in Chicago, Illinois. Ronnie shared great stories about working together for success with some of the greatest players (Jerry Rice, Joe Montana, Roger Craig and others) as well as being coached by the legendary Bill Walsh. His own business experience and sports success were a powerful combination for an inspiring motivational speech and show and tell as he passed around his four Super Bowl Champion rings. Direct Sportslink has secured Ronnie Lott for numerous appearances, aurtograph signings, and motivational speaking engagements including events for corporate clients NetApp and Cisco Systems.

Thank you so much - the speech went great and Ronnie Lott is the nicest and most interesting star I have ever met. Good job! Thanks too for the footballs. You guys were great.

After college, Lott was drafted by the San Francisco 49ers in the 1st round (8th overall pick) of the 1981 NFL draft. In his first season, he recorded 7 interceptions, helped the 49ers to win Super Bowl XVI, and also became only the second rookie in NFL history to return three interceptions for touchdowns.

He played his last four seasons with the Raiders, in his 14 seasons, Lott recorded 8.5 sacks and 63 interceptions, which he returned for 730 yards and 5 touchdowns. He also recovered 17 fumbles, returned them for 43 yards, and gained 113 yards on kickoff returns.

Ronnie is one of the best business speakers for any group looking to hear about accountability, working with pride, trust, and what it takes to be a champion. A successful businessman in his own right, Ronnie was coached by one of the greatest coaches in all of sports and is someone who played with numerous Hall of Famers. He knows what it takes to lead any team. Please make sure to review the Ronnie Lott corporate speaking engagement with Transamerica above.

Secure Ronnie Lott for Your Event

Based on your interest in Ronnie Lott as a speaker or for a personal appearance, Direct Sportslink has provided you additional links below for other sports talent with similar appearance fees, speaker topics, and categories that match Ronnie Lott.